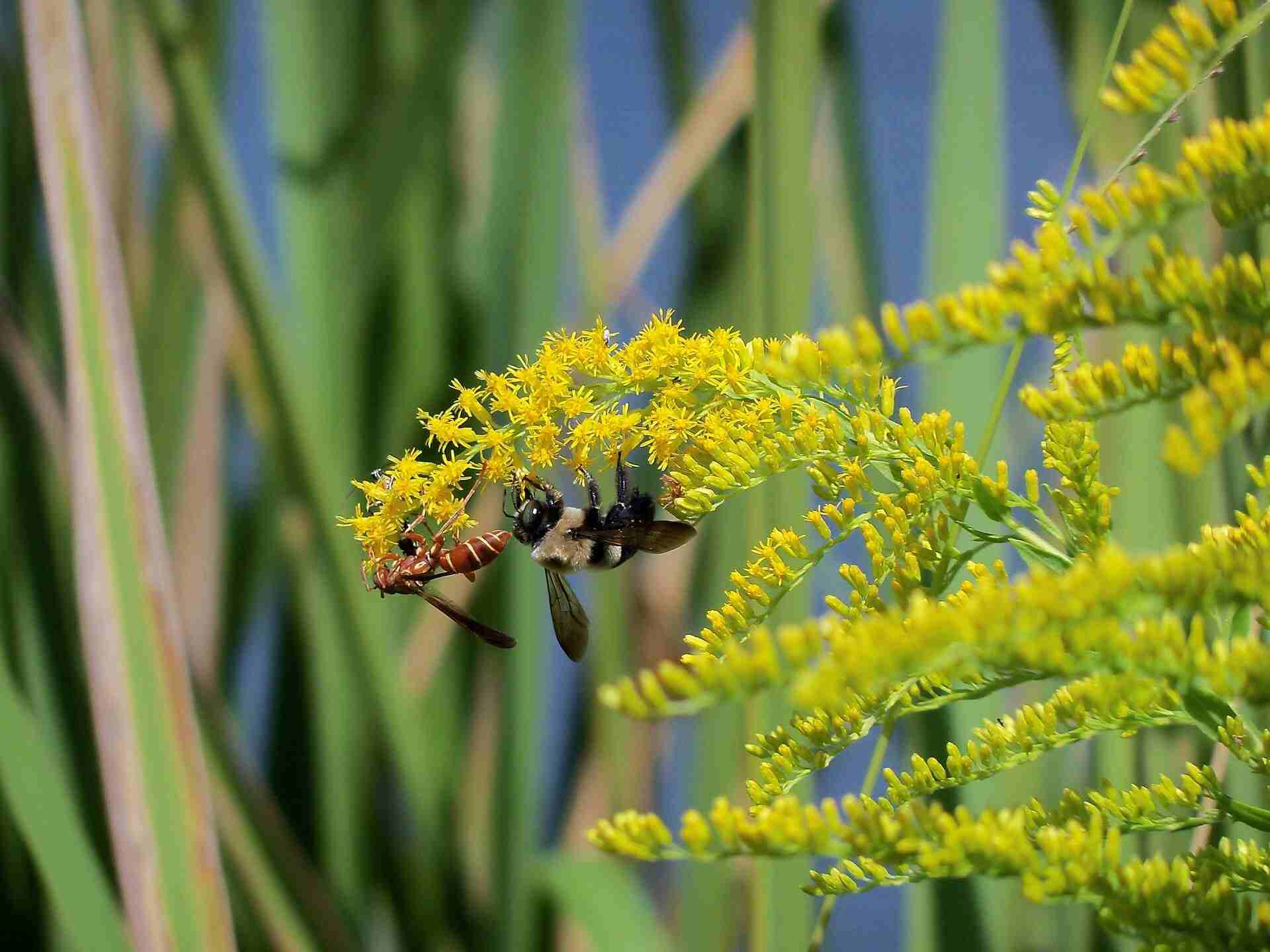 Yellow jackets are insects marked by a unique yellow and black striped head and thorax. They are one of the most dangerous stinging insects on earth and even more aggressive than other stinging insects such as bees and wasps.

Yellowjackets always defend their nest to death and in large numbers when under attack, and in most cases, they usually emerge victoriously. Yellowjacket mostly preys on insects, flies, spiders, molluscs, caterpillars, and much more. They can travel for up to 1000 feet in search of food and water.

When you see one or two yellow jackets flying around your backyard, then it could just be a matter of time before they invade your home. The good news is that there are natural ways to get rid of yellow jackets, as discussed below.

One great way to get rid of yellow jackets naturally in bushes is by setting straps. Yellowjackets love sugary foods. You can use it against them. All that you need to do is recycle a two-liter bottle. Fill it with water, add a sugary substance such as jam as bait to entice them, shake the mixture thoroughly, and then hang it in bushes where they are likely to gather.

Any yellowjacket that will land on the bottle will drown. There are many forms of traps that you can set to capture yellow jackets in bushes. Use a technique that works best for you.

Lemongrass is widely used for medicinal purposes. However, recent studies have shown that it is also an effective repellent for yellowjackets and other flies such as mosquitoes.

The lemon grass has been listed on the Environmental Protection Agency website as one of the most effective natural insecticides. Planting lemongrass in bushes can help keep yellow jackets at bay.

Yellowjackets don’t like to come close to anything that smells like mint. Peppermint is a very effective natural repellent and can help to get rid of all sorts of flies, pests, and insects, including yellowjackets. A 2013 study conducted by the Pest Management and Science revealed that peppermint oil is an excellent repellent for insects such as yellowjackets.

To use peppermint oil, all that you need to do is soak cotton pad on peppermint oil then place them strategically on the siding, particularly on areas where they are likely to nest or hide.

The diet of an adult yellowjacket consists primarily of items such as carbohydrates, sugar, fruits, tree sap, and flower nectar. So, if your home has foods that yellowjackets love, then they are more likely to invade your home. [1]

The best way to avoid this is by eliminating the source of their food in the ground so that they don’t find a reason to invade your home. Ensure that you dispose of your garbage in an enclosed litter to avoid luring them in your home.

4. In The Wall Of The House

Seal Cracks And Crevices In Walls

See Also: Top 5 Ways To Help Save the Bees [and Save the World]

Dump Dry Ice On Their Nest

This is a very effective natural technique that can help to eliminate yellowjackets in your garden. All that you need to do is dump some dry ice on the entrance of their nest then cover it with dirt.

The dry ice combined with soil will release carbon dioxide, which will suffocate and kill them. Before using this technique, we recommend that you wear eye protection glass and heavy-duty gloves to protect yourself from their dangerous sting.

If you want to keep yellow jackets in brick walls at bay without using toxic chemicals, then using fresh cucumber is a great option. Fresh cucumber is very effective in warding off insects such as yellowjackets.

All that you need to do is cut a fresh cucumber into several pieces then place them in an aluminium foil. Cucumber will react with aluminum foil then produce a chemical scent that is undetectable to humans but lethal to wasps like yellowjackets.

Trap Them With A Glass Bowl

The yellowjackets will fly straight into the container, where they will eventually starve and die. We recommend that you do this at night to avoid their nasty sting. [2]